"Earth vs. The Flying saucers" is a seven inch single by The Residents. It was originally included with "The Cryptic guide to The residents" book and has never been rerelased. The single and the book were both released in 1986. It was pressed on green vinyl. Also, it is one sided.

- Earth Vs. The Flying Saucers

- The single contains the soundtrack for the music video of the same name. The video was released on "Video Voodoo" and "Twenty Twisted Questions", but wasn't released on "Icky Flix".

- It was performed in a medley along with "Where is she?" in the "Thirteenth Anniversery Show". 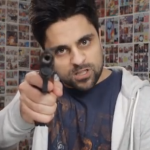